For the first beer from AleSmith brewing that my friends and I have tried, My Bloody Valentine was met with mixed results. 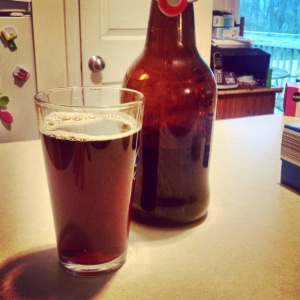 When first looking at this beer on my kitchen counter, it looked almost brown, but when brought into better light, it was a deep red color with a lighter colored head.  When bringing the glass up to breathe in prior to our first sip, we had a nice citrus note that was somewhat herbal, like lemongrass.

Flavor clung to the back of the tongue after starting off light and crisp, leaving a slight bitter taste on the back end.  This carried over in how everyone described the mouthfeel.

Admittedly, most of my friends were not as fond of it as I, but did admit that it was better as it breathed a bit and warmed up closer to room temperature.  This beer was reminiscent of a blend of a mild IPA and a red ale.

Recipe ideas:  I would love to use this in a bread recipe!